Dubbed by Vice as Montreal’s Premier Art Vandal, MissMe has been busy wheat-pasting, preaching, and taking no prisoners. Her explosive style draws you in, but it’s the amplification of marginalised voices in her bright, powerful works that gives you something to take away.

An activist, feminist, and one of the most recognised outlaw artists in North America, MissMe’s unapologetic pieces command attention in sharp tones, exploring her own struggles with race, gender, society, and class while uplifting icons of the past. Her compelling, elegant, and sometimes unsettling large-scale wheat-pastes swallow buildings whole, confronting issues of dignity ­and forcing us to reconsider our own truths.

Rarely in any city for more than a few months at a time, the Artful Vandal has channeled the momentum of her art’s global success toward a new movement, passionately advocating for women as role models and pivotal members of their communities.

Regularly asked to speak on radio shows, featured in magazines, on panels, and in conferences as the voice of new feminist activism, MissMe has also organised her ideas into workshops and teen programs. Spotlighted by Complex, HuffPo, Vice, TED, and countless others, MissMe’s message is resonating around the world as she continues to shine an illicit light of beauty on the stage and in the street. 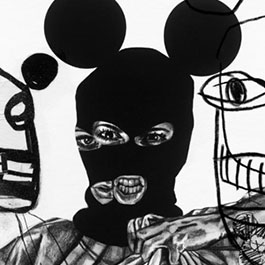 MEDIA:
Printed on 300 GSM paper with a 2 inch border

MEDIA:
Printed on 300 GSM paper with a 2 inch border